Mass killer of 51 Muslims gets Life in Jail 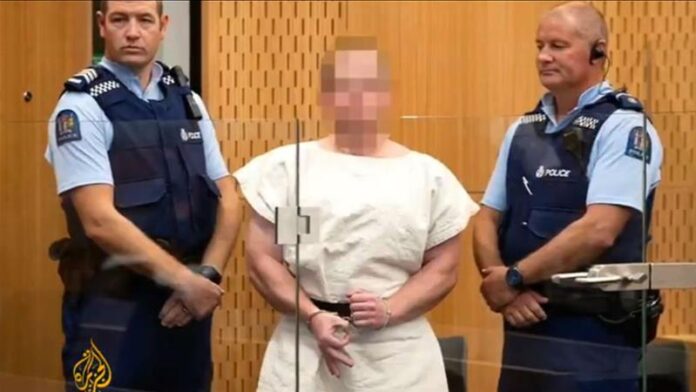 Brenton Tarrant, the perpetrator of the Christchurch massacre, March 15, 2019, is jailed for life

The sign of the alt-right – the OK symbol formed by thumb and index finger with the other fingers fanned into a K above the O – is inverted right there in the photo of the mass murderer above. Yes, he deserves to stay in jail for life. But don’t imagine that his white supremacy extremist ideology has not already taken root here.

NZ began when Aotearoa was invaded by white supremacists. The land wars that allowed the theft of Maori land provides the economic base for an economy that perpetuates white racism today. White racism serves to denigrate non-Euros and justify the right of Euro white supremacy to conquer the world. NZ is a first cousin of the other Euro white settler colonies with the US as the biggest and brutal case.

The old white empires of Britain and the other Euro powers, and the white settler colonies, notably the USA, are in decline and with it the cultural dominance of white supremacy. So the fear that the Asian powers led by Russia and China would come to control Eurasia has come to pass.

NZ’s European population is in decline relative to new migrants from Asia. This is a threat to the Anglo-American settler culture that has dominated NZ since colonisation as a ‘property-owning democracy’.

Today the civil war between the old white world powers and the rising new world nations drives social divides along ethnic and nationalist lines. These cut across social class and create a mass base for fascism. The civil war is now being televised on the streets in the US right now.

Watch out kiwis, you are not a ‘team of 5 million’ but a nation divided along ethnic and national lines. Ironically the reality is that NZ is a neo-colony  subjected to both US and China imperialism. So, race and national wars serve only Anglo/US/Euro and Asian imperialist rule of NZ.

The solution is to wake up and recognise that fighting civil wars along these lines is a diversion from the class war – that between the 80% that creates the wealth, and the 20% that lives off that wealth – which is the only war that the majority can win.

Our symbol is not the ‘OK’ of white supremacy but the clenched fist of proletarian revolution!

← Aotearoa: a Covid Election in a Dying World in the Age of Rotten Capitalism
DeGrowth and the Theatre of the Absurd →