Budgets are a fiscal fig-leaf for the naked capitalists 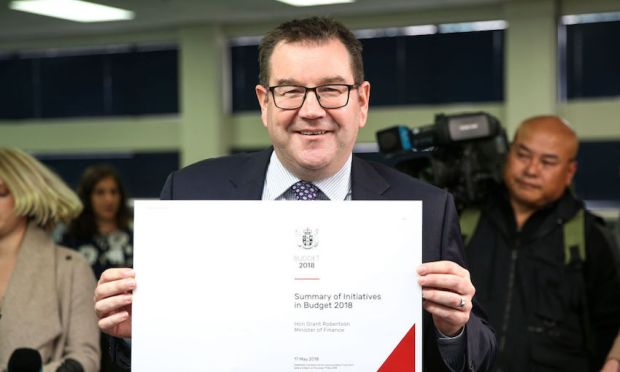 Labour’s budget has been condemned by left and right as breaking its promises to spend more on restoring funding in health, education housing and income support. Labour’s excuse is its ‘fiscal responsibility’.

This in turn is widely criticised as a major concession to the right, as if any political party in NZ could survive in parliament today without ‘balancing the budget’. This means that the state can only spend what it gets via taxes and other income.

What it actually means that capital does not want to pay taxes at all, never mind that these taxes are deducted from profits created by wage-labour. Because such taxes are a drain on profits, and profits are falling as capitalism itself is in decline.

So look beneath the fiscal cap and find the truth – profits rule. Therefore it is not enough to hold the Labour coalition to some impossible dream to live up to its promise of a ‘human face’ for capitalism. It is not enough to claim Labour is hostage to ‘bourgeois ideology’ without understanding what this actually means, because to talk of getting rid of bourgeois ideology is to talk revolution.

Bourgeois ideology is a system of beliefs that misrepresents the social reality as egalitarian when it is in fact fundamentally unequal. It holds that economics is based on the free exchange of value between equal citizens who buy and sell commodities as workers, capitalists and landlords.

But this is a fiction based on the way capitalism appears in everyday life where the sphere of exchange masks the underlying class inequalities in the sphere of production. I obscures the fact that labour is the only component of economics that creates value. The role of landowners and capitalists is to take advantage of their historical dispossession of workers and peasants of land and tools as a means of production.

To subsist workers then have to agree to work for capital where they are paid out of their future labour value and worked for longer hours than is necessary to pay their own wage, to provide surplus value which is the basis of profit (and its ‘overheads’ interest and rent.)

The same material conditions that produces the ideology of market equality, produces the ideology of the bourgeois ‘citizen’ – the sovereign individual who acts freely politically to represent his/her private interests in the market.  Yet neither can be the case when capitalist social relations are reproduced by the state. That is why Marx talked of the bourgeois state as the “organising committee of the ruling class.”

The bourgeois state exists as the guardian of this fundamental class relation and to reproduce capitalism as an exploitative system. The state and its various apparatuses, parliament, the bureaucracy, the judiciary, the military, and above all the executive, are all devoted to protecting private ownership of the means of production, and hence the production of profits.

This obviously means containing and repressing opposition on the part of the working class to its exploitation. The main means of containing workers is to present bourgeois parliament as ‘class neutral’, i.e.representing the democratic will of the majority of equal citizens, voting for parties that claim to represent the ‘national’ interest. This presents policy making as a political contest on the terrain of the ‘nation state’ between parties who represent the majority at any given time.

However as the class struggle intensifies the states ability to contain opposition peacefully within the framework of parliament is strained.

Parliament is a front behind which the power of the state is mobilised by one class against the other – surveillance, media manipulation of events, criminalisation of workers etc etc. Parliament is exposed as the democratic facade of what is really a bourgeois dictatorship – the dictatorship of capital.

The historic role of social democracy is to attempt to contain workers in parliament pinning their hopes on reforming capitalism when objectively it needs to break with bourgeois ideology for form independent working class parties to challenge the rule of capital.

“Objectively” in this context, means that capitalism is manifestly in decline and destroying its own productive base. The 20th century is the history of capitalism mired in depressions and wars that could only prolong its life at the expense of the lives of the world’s workers and poor farmers, and today by the destruction of the ecosystem that sustains most life on the planet.

NZ Labour today is no longer the social democracy that contained the working class by promising equality and security. It is now in a liberal coalition with other parties who are all committed to defending the naked rule of capital, but with a so-called ‘human face’. But this is a glaring contradiction. How can capitalism have a ‘human face’ when it is destroying humanity?

The working majority in Aotearoa needs to throw off the yoke of bourgeois ideology and its sham democracy and organise independently to end the rule of capital. We do not need the bosses to organise production. The free market is a fiction as profits have always been based on the social compulsion of wage labour and the expropriation of surplus value.

Bourgeois democracy is a sham exposed as an ideological front for capitalist rule.

We need workers democracy in which the producers of value also make the decisions over the economy to plan production for need and not greed.

We do not need finance capital and speculators to destroy our lives.

We need a central bank that prints a currency whose function is to act as a measure of value and medium of exchange.

These and other fundamental transformations of our economy and society will follow once the working majority is in power in a workers’ state. But to make this happen we need first to destroy the material basis of bourgeois ideology – our compliance as wage slaves of capital.