Trump Plays with Fire in Korea 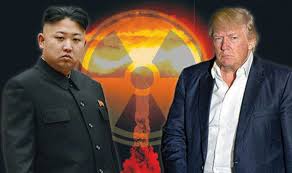 Trump is reviving Bush junior’s bellicose approach to the DPRK which carries great risks for the whole world.

By revving up the ‘axis of evil’ scenario he risks global destruction for the sake of what: tourism? In his bizarre phone conversation with the Governor of Guam he boasts that the publicity will boost Guam’s hotel occupancy to 110%, and that anyway Trump backs Guam 1000%. A fat lot of comfort that will give to the citizens of Guam many of whom see themselves as ‘pawns’ in the US global game of chess.
https://www.nytimes.com/2017/08/12/world/asia/trump-guam-governor-phone-call.html?smid=fb-share

China, according an Editorial in the the semi-official Global Times, sees the war of words between Trump and Kim Jong-un as a “Reckless Game”. It states what is likely to be the official China line.

The US and North Korea have both ramped up their threatening rhetoric. The Pentagon has prepared plans for B-1B strategic bombers to make preemptive strikes on North Korea’s missile sites. US Secretary of Defense James Mattis issued an ultimatum to North Korea on Wednesday to “cease any consideration of actions that would lead to the end of its regime and destruction of its people. Meanwhile, North Korea issued plans to fire four intermediate-range missiles to land 30-40 kilometers from Guam and claimed it would finalize the plan by mid-August.”

If these threats are acted on that would seriously escalate the war of words in a shooting match. China would likely not intervene at this level but promises to do so if there is any attempt to invade the DPRK by the US and the ROK.

China should also make clear that if North Korea launches missiles that threaten US soil first and the US retaliates, China will stay neutral. If the US and South Korea carry out strikes and try to overthrow the North Korean regime and change the political pattern of the Korean Peninsula, China will prevent them from doing so.

The prospect of a hot war between China and the US over Korea is dangerous for everyone in the region including New Zealand. It would risk escalation into nuclear war and that war becoming the dreaded WW3. China is currently trying to persuade both Trump and Kim Jong-un to back off. But it could not sit back while the DPRK is directly attacked or invaded. So why is Trump trumping the most belligerent of US Presidents George Bush in the level of threats made against the DPRK?

Is Trump such a maverick that he can’t tell the difference between what is good for business and what is good for humanity? Even ‘casino Capitalism’ requires punters. Clearly there is room for moderating the Bush bellicosity in the direction of Clinton’s negotiated deals on nuclear proliferation. Clinton knew that the DPRK regime was an anachronism, a failed state, and not some threat to US interests. Obama continued this policy recognising that the DPRK was a small fish in its own tank compared with an expansive China. So is this crisis down to Trump’s personality, the back-to-the-Great-USA fundamentalism of his militant support base pushing Trump into war, or is there something deeper driving this?

The global forces that are behind this crisis are those of a renewed rivalry between the declining US imperialist bloc, and the rising China/Russia imperialist bloc. The US has dominated the Pacific since the end of WW2. It defeated Japan and established its allies and bases in the region including the armistice on the 38th parallel in Korea separating the ROK and DPRK. But the US failed to stop the Chinese revolution and having worked hard since Nixon went to China in 1974 to restore capitalism and destroy “communism” eventually got its wish but was unable to reap the prize – a servile client state to inject some life into the US economy.

Instead of succumbing as new colonies of Western imperialism with the end of the cold war, both China and Russia as former ‘workers’ states’, used their state controlled economies to deny the West their prize of conquest. Both opened up to the West but more or less on their own terms. Western investment was quarantined within these state capitalist regimes to benefit the ‘red’ capitalists. Today, both are emerging as rivals to the declining US imperialism. And as is always the case with declining capitalist powers they cannot compete economically so they do so militarily. But today, the US is no longer the ‘hegemonic’ global power facing China’s economic dominance and Russia’s military technology.

So Trump’s foreign policy in Asia, while adventurous, is an inevitable expression of this rise and fall of great powers. Korea is one of a number of flash points around the world between the two imperialist blocs where the US faces the rising influence of China/Russia including Ukraine, Syria, the South China Sea. All these flash points are evidence that the rivalry between the old and new imperialist powers explains what is going on in the world.

More importantly, all these imperialist powers are facing a global, terminal crisis as the global system stagnates. While they are competing in Europe, the Middle East and Asia with economic and political sanctions, and fighting proxy wars, facing termination, these wars must escalate into regional and ultimately global extermination. So what we are seeing in Korea today is the prospect of a cold war on words that spreads to hot wars between nuclear powers.

It is not in the interests of any power to go to world war as it would destroy  not only the enemy but any economic base for survival of the human species. The problem is that such wars can start by accident, or by crazy “Dr Strangelove” actors who push the wrong button. So what can we do to try to stop such a catastrophe?

For a start we should tell our NACT regime not to follow the Australian example of unconditional support for Trump. NZ is a semi-colony of the US AND China. Politically our ruling class it is client of the US, economically it is a client of China. Both are imperialist powers which exploit the NZ economy at the expense of NZ workers. We must be against the intervention of both (all) powers on the Korean Peninsular and refuse to support any request to side with one or other. Not because NZ has an international reputation for peacekeeping which is a lie as our intervention on Afghanistan proves. Our neutrality should be against any war in which a small power becomes a pawn in the fight between two global powers because as a semi-colony ourselves we defend the right of other semi-colonies to be independent of imperialist domination.

So our neutrality does not extend to Korea itself. We are for its self-determination which in simple language means independence from all imperialist powers. During the Korean war the left in NZ was split between the Stalinist, Maoist and Trotskyist left that defended the DPRK as having a legitimate claim to oust the US from the ROK and create a united socialist Korea. The rest of the anti-war movement had illusions in the UN armistice as creating ‘peace’ in denial of the ongoing ‘class war’ that shapes our destinies.

Today we have to take the same stand against China’s threat to intervene to defend the DPRK. This turns Korea into the site of another proxy war between imperialists over who controls Korea. Korean working people must determine their own future in a united Korea. They must be supported by the billions of working people around the world who lives are at stake can change this by organising into a global anti-imperialist movement.

This is why we urgently need a left in NZ that is anti-imperialist through and through rather than pacifist with illusions in the UN. That is the only way to unite workers in both Koreas, China, the US and the rest of the Pacific, against the imperialist regimes and their client regimes that a pushing for war and risking global catastrophe.  In playing with fire in Korea Trump is playing with all of our lives. To survive we need Survival Socialism.